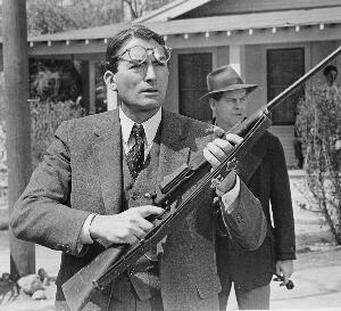 This is a very good picture of Atticus because it shows atticus' bravery because he will shoot a gun after not touching one for 30 years. Atticus is not a killer but for the well being of others he knows what to do in situations like this one.
Atticus is changing because after 30 years of not killing and touching a gun he over comes that and mans up to shoot that rabid dog.

It started when Jem was panicing about a rabid dog in the neighborhood and told Calpurnia, who then told Atticus. Atticus decided to man up and kill the dog with his gun.It is very brave for atticus to kill the dog because the whole town of Maycomb would know he did , and could possibly scarred Scout for the rest of her childhood. This event changed how everyone viewed Atticus as a person while also showing how he has no fear of social prejudice. 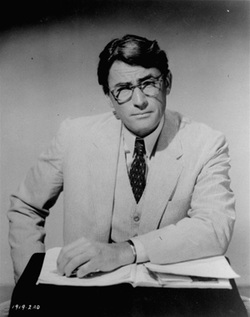 Atticus is a smart man he always knows what to do in situations and Jem and Scout love him.  We chose this video because Atticus is a good shot just like the person in this video.
He always tries to do the right thing (and looks cool while doing it).

HOw This song resembles Atticus.

This song resembles atticus because Terry Crews is a very strong person and so is atticus but not in the same aspect. Atticus is a very stong moral person he is the person that always knows what to do in situation and does the right thing most of the time.
Powered by